They Greased Their Bird Feeder To Keep A Squirrel Away.

Lee Wilson > fun > They Greased Their Bird Feeder To Keep A Squirrel Away. 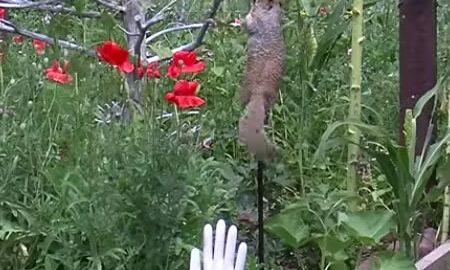 These folks had some trouble with a squirrel nabbing the seed from the bird feeder. He’d climb up the pole and steal all the seed, leaving none for the birds.

That is, until they decided to put some Vaseline on the pole. I remember trying to climb a pole at a fair that was Vaselined up. They had a $100 bill only about 12 feet up. I paid dollar after dollar until I realized it was impossible to climb the pole. Does this squirrel learn that lesson? Watch, it’s absolutely hilarious! This is one of those times where a computer screen perfectly captures the pure joy of watching a squirrel try to climb a greased up bird-feeder pole. If you’re anything like me, you’ll laugh maniacally while you watch!